Stacie got a new kayak for her birthday the weekend before our trip up to Grand Teton, and any time I can incorporate water into our trips Stacie gets on board very quickly.  One of the unique features of Grand Teton National Park is not just the stunning mountains it contains, but also the array of lakes at its base.

As born and bread easterners still not yet accustomed to the constantly cold water out west, we decided to avoid the bigger lakes like Jenny Lake and Jackson Lake.  We have sit-on-top kayaks so we’d be getting wet.  String Lake, which is extremely shallow and hence the warmest of all the lakes in the area sounded perfect for us, and with Leigh Lake right next door with some of the best scenery in the park, we figured we’d better check that out too.

Upon pulling up to String Lake we were immediately blown away by the scenery.  The Teton Range looms just overhead the shallow and beautiful lake, surrounded by alpine trees.  We weren’t exactly sure where to put in, and found a spot right in the main parking lot.  As it turns out, there are better launching spots if you follow the signs for the Leigh Lake picnic area before parking, but we were able to manage fine.  As an added bonus, the cove that we launched in was one of the most scenic spots on the lake.  It was also one of the most secluded spots, as the crowds grew by the proper put-in point which also had some sandy beaches and rocks to jump off of. 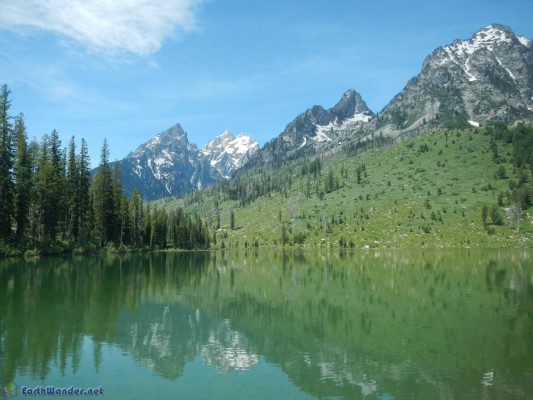 Our private cove on String Lake

A trail winds around the lake, though the best views are from out on the water.  Kayaking out on the lake was serene.  I’m no lake traveler, but this was my favorite lake I’ve ever been in.  In addition to the insanely beautiful mountains looming above, the crystal clear water combined with the shallow depths of the lake (never more than 3-4 feet deep) means that the scenery keeps going as you look down.  Boulders, rocks, and large trout that can be seen crystal clear through the water.  The shallow depths also mean you can jump out easily at any time, though even as the warmest lake in the region the water was still freezing cold, maybe as “warm” as 60 degrees. 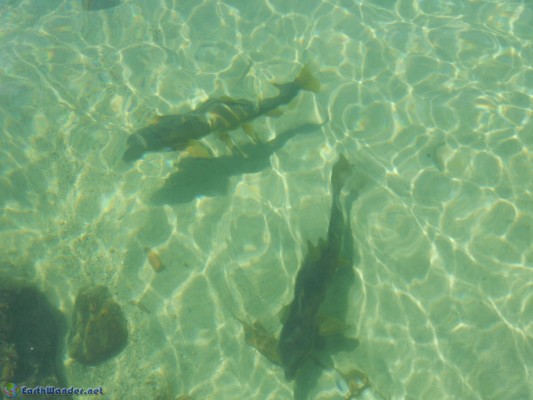 Fish swimming beneath us. It’s hard to tell from the photo but they were probably about 30″ long.

Another thing that I really like about String Lake is that it’s not just a big circle like most lakes.  It’s long and narrow (like a….string) almost like a river.  Since we’ve got sit-on-top kayaks most rivers are off limits to us, so a lake shaped like a river with the views changing around every corner was perfect.

The cove we started in was all the way at the south end of the lake, and we made our way all the way to the north end which was a pretty moderate mile and a half or so away.  The north end of String Lake actually connects to Leigh Lake, but the water is too rough and shall to paddle through.  Instead, you have to make a ~200 yard portage (which, as we learned, meant carrying your boat out of the water) to the Leigh Lake put-in.

We made the portage fine, and were even lucky enough to run into a guy who offered to help carry Stacie’s side of the boats.  Being pregnant does have its advantages even though Stacie was being quite the trooper.

Leigh Lake is much more similar to a traditional lake, deep and wide open.  The scenery was great though and, being back from the mountains a little further, gave us a bit more of a panoramic view than String Lake.  After tying our kayaks together and having a peanut butter picnic out in the middle of the lake with incredible views, we were able to paddle along the shoreline for a little while with the views changing subtly as we swung around Mt Owen and the mountains began to surround us.

At the western most edge of the lake it looked like there was a spot where you could pull off and hike up into one of the mountain canyons.  A fun journey for another trip.  It was at about this time that I noticed my legs were turning bright red and threw on some more sunscreen at Stacie’s behest, which was a good thing because we took our time on the trip back.  Once we returned to String Lake we pretty well floated back, as I took a chance to stretch my legs and even lay down in my kayak for a while.  I can’t imagine it getting much better than that.

Here is a link to our route, which I tracked using the Endomondo app on my phone.  Note that I had forgotten to turn it on until we were in Leigh Lake so our total distance traveled was probably a little under double the 4 miles that the app actually logged.

From there we enjoyed a nice dinner at The Mural Room in the Jackson Lake Lodge, got cleaned up, and headed out to Schwabacher Landing for sunset photos.  We lucked out with a great, cloudy sunset and I got some great shots from there which I have up on my photo sight, Ryan Moyer Photo, as well as explanation of how I captured them.  During the shoot I also managed to grab a shot of Stacie and I, which is one of my faves of the two of us.

With Stacie getting an extra day off for the 4th, in addition to her typical Monday day off, we made the last minute decision to head up to Wyoming for the 4th.  We had considered heading to Yellowstone, but with only two full days and already long drives on the other two days we decided the...