With Stacie getting an extra day off for the 4th, in addition to her typical Monday day off, we made the last minute decision to head up to Wyoming for the 4th.  We had considered heading to Yellowstone, but with only two full days and already long drives on the other two days we decided the massive Yellowstone NP would be better seen on a longer trip.  Instead, we decided to spend the majority of the trip exploring the Grand Teton area (though we did make a quick diversion into Yellowstone for half a day).

We decided to take the scenic route from our home in Ogden up to the park, suggested by Kbecjeans on tripadvisor.  This drive works as the most scenic route from Salt Lake City up to Jackson/Grand Teton as well.  This entailed taking I-15 only as far north as Brigham City (instead of most of the way up), where we exited onto US-89 East for the majority of the drive.  Instead of interstate driving, this takes you through the Cache Valley and the city of Logan, into the beautiful Logan Canyon, and past Bear Lake into Star Valley.

As residents of Ogden we’re no stranger to beautiful Canyon drives, but one nice advantage of Logan Canyon over Ogden Canyon or the Cottonwood Canyons is the sheer length of it.  It took us probably 45 minutes to drive through the canyon, winding along the Logan River and amidst massive mountain walls the whole time while snacking on some delicious cherries and raspberries we’d purchased at a fruit stand outside Logan.  All along the drive we saw people dropping various watercraft into the river to float down amidst the serene setting.

Equally as impressive as the canyon itself is the exit from the canyon high country to the overlook over Bear Lake.  For those that don’t know, Bear Lake is a massive lake recreation area on the Utah/Idaho border.  One of its major unique features, in addition to its mountain setting, is the calcium runoff that flows into the lake and causes it to change colors from day to day, fluctuating between bright green, aquamarine, and deep blue.  It can sometimes look like the sea water in the Caribbean. 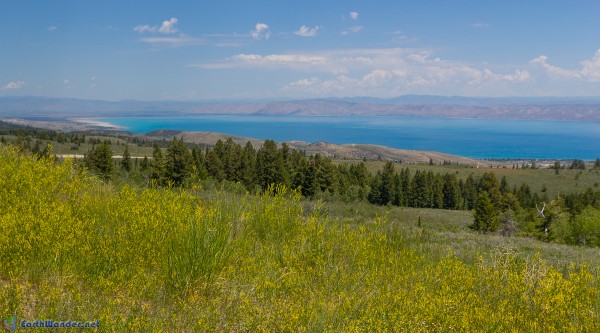 When coming up out of Logan Canyon this expansive lake appears below you, in our case glowing aquamarine.  It’s a very impressive sight coming up over the ridge, and a well placed rest area complete with an overlook and a visitor’s center is a great spot to pull off and take in the view, which we did.

After taking in the view for a few minutes and unloading our bladders, the drive then took us through some easy switchbacks down the ridgeside and into Garden City, at the shores of Bear Lake.  We had to pull off briefly for an invasive species inspection of the kayaks we were transporting, and then it was into Garden City proper.  There’s not much to the place, other than big signs shouting “WORLD FAMOUS RASPBERRY SHAKES” everywhere you look.  Kbecjeans Tripadvisor post had advised stopping for raspberry shakes here and we weren’t sure we were going to be able to find them as no specific location was mentioned, but don’t worry, you literally can’t miss them.

Turning left at the lakeshore to stay on 89 and continue the drive, we spent the next 20 minutes or so driving along the shoreline and its beautiful beaches.  Another noteworthy thing about this area of the drive is the city names.  You go from Paris (not the one in France) into Montpelier (not the one in Vermont) and into Geneva (not the one in Switzerland), finishing by driving through an area signed as the Ireland Bank (not the one in Ireland).  If you want to take pictures of town signs and pretend like you’re traveling around the world, this is the spot to do it (though you may have to photoshop out the part about the population in Paris being only 504 people).  Paris even has the Eiffel Tower on its city banner.

From here, we somehow spent the next hour or more driving through Star Valley.  It’s kind of bizarre to see a business named Star Valley Cleaners and then 90 minutes later drive past one called Star Valley Automotive, but this valley seemingly stretches forever.  As with everything on this trip, the drive is pretty though (although it’s probably the least scenic part of the trip).  It reminded Stacie and I of the rolling green hills of Ireland a bit, which I’m sure was aided by the celtic music streaming through the radio.  Stacie even commented at one point that she saw some white blogs on the hillside and thought they were sheep, then remembered that we weren’t ACTUALLY in Ireland and assumed they must have been rocks.  A few minutes later, we drove right past a herd of sheep standing next to the road.  Maybe we were in Ireland afterall.

Eventually, Star Valley gave way to a more built-up resort area alongside the Palisade Reservoir.  Another pretty area, this is where you take the right hand turn onto 26-East for the final stretch into Jackson, WY.  As with everything on this drive the scenery did not disappoint.  The drive takes you through another river gorge, alongside the Snake River.  The beautiful river was absolutely loaded with people taking advantage of the scenery and fun it offers, with rafts, tubes, and kayaks aplenty and cars lined up at every put-in/take-out point.  We passed a sign that mentioned that the water temperature was 54 degrees.  As I looked up at the overcast skies and 70 degree outside temperature readout on my dashboard I was very impressed by the number of people in the water.  The cold water is one thing that this Florida boy still has not adjusted to about living out west.  I can barely dip my foot in 54 degree water even if it were 100 degrees outside, yet here are people floating down this river in tubes with their body half submerged in 54 degree water on an overcast 70 degree day. 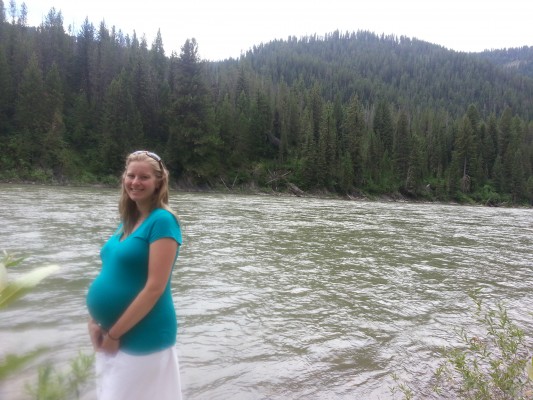 The windy road eventually took us into the town of Jackson.  I was impressed with the setting of the city, nestled right in the mountains.  World class skiing in the winter, an awesome river canyon in the summer, two great national parks right nearby, and a Park City downtown feel with great restaurants?  Sign me up.

The final leg of our trip was the brief stretch from Jackson to Grand Teton, and even with the impressive Bear Lake overlook, Logan Canyon, Star Valley, and the Snake River gorge all behind us, our most WOW view was still ahead of us.  That took place as we drove out of Jackson, through the Elk refuge, and around the bend of a small mountain as the massive Teton Range came into view.  Like coming out of Logan Canyon with Bear Lake smashing into your view, this was just a pure WOW moment.  Of course, I pulled off as soon as I could and started snapping photos, but this was only the beginning of our long weekend in the area so I took it a little easy. 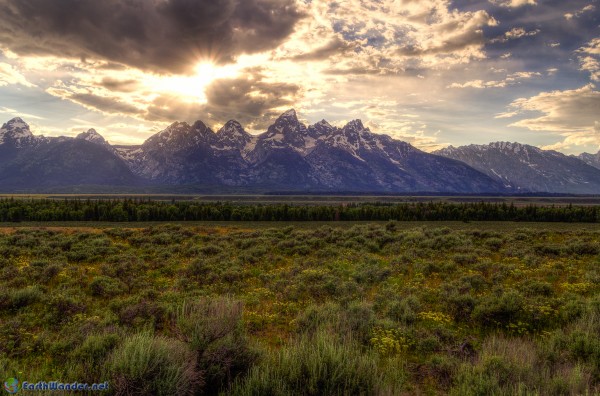 The rest of our drive took along the edge of Grand Teton National Park, with beautiful mountain views the whole way, until we reached our destination of the Jackson Lake Lodge at the north end of the park.

The only downside to the route we took is that it didn’t take us over Teton Pass at the end, which is something I’d like to see, but really the whole thing was a beautiful drive and well worth missing that.  The best part about it is that there’s really very little to the drive that’s not scenic.  You’re not driving past stretches of boring areas to get to the next pretty area.  The whole thing is pretty and you pretty much go from one scenic area directly into the next.  From Cache Valley into Logan Canyon.  From Logan Canyon to Bear Lake.  From Bear Lake to Star Valley.  From Star Valley to the Snake River Gorge.  From the Snake River Gorge into Jackson.  And finally from Jackson into Grand Teton National Park.  There’s no break for your eyes and that’s a very, very good thing.

All in all the drive took us about 7 hours with all our stops.  Driving straight through it probably would have been a little over 5 hours.  Keep in mind that the Subaru was also loaded up with a couple of kayaks on the roof so I kept my speeds a little lower than normal.  That left us with just enough time to check into the lodge and head back into Jackson to celebrate the 4th with a good old American rodeo and fireworks.

My Tripadvisor Reviews from this Trip
Cafe Sabor 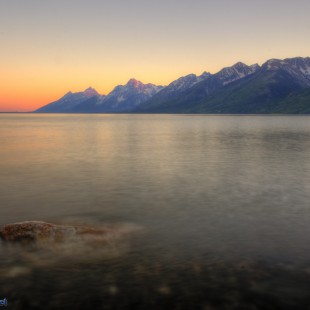 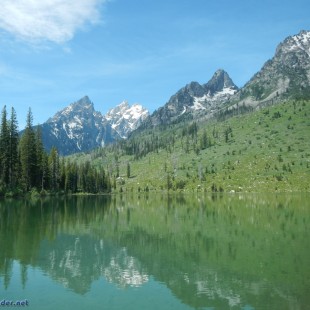 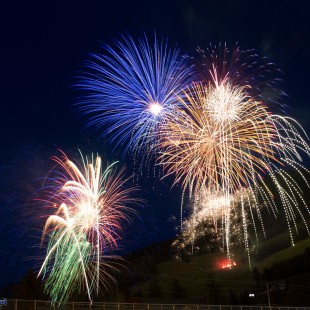